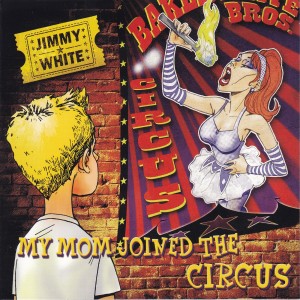 White shows an amazingly broad spectrum of musical tastes on this new 11 track CD: The tropical feel of “Michaela” and the Country flavored, “Two Beers Better” feel more commercial, while “Miserable Man” and “No Goodbyes” are very personal to the artist. On this CD, White also took a comedic look at life with the title track, “My Mom Joined the Circus” and “Daddy Looked Good.”

When asked about the eye catching title track, White offered, “There isn’t a story behind the title; it was a song that just came to me, as if from another place. It took on a life of its own and ended up being a song about a young man who ends up becoming inspired by his mother, a woman who began her life again, just when she seemed a little too old to do so.”

When asked to describe the feeling of his new CD, White said, “This CD is softer than my previous albums, very melodic, containing songs that are pure pop, others that are the most inspirational of my career, and others that are just plain funny, which is a big part of who I am as a person. “

“Circus is a culmination, of sorts, of the phase of my career where I had finally achieved the commercial and artistic success that I had always longed for, with ‘Two Cities’ and ‘Good Friends Are Hard To Find’. Like ‘Good Friends’, Circus is just me being me, laughing, crying, and always doing the very best I can.”

There are two musicians/groups playing on the record that are in the Rock Hall of Fame, Gary Mallaber (Steve Miller,Van Morrison, Bruce Springsteen among many others) and the members of the Kenny Rogers Band.

My Mom Joined the Circus is released on 828 Records and the full CD, singles and ringtones are now available on iTunes, Amazon and other digital distributors.